Hector stoically leaves the safety of his city to face the Greek hero Achilles and certain death. As he and Achilles fight, they are watched by Hector’s ever-loyal wife, Andromache; the lustful Greek army; bored Trojan women, resigned to their fates, the sacking of their city, and somewhat bored by the whole affair; old Priam, who prepares himself to brave the enemy camp and confront his son’s killer; misshapen Thersites, the first victim to Achilles’ wrath; and others. This dramatic retelling, based in part on Homer’s Iliad, is filled with action, passion, soaring verse, and even rollicking humor. 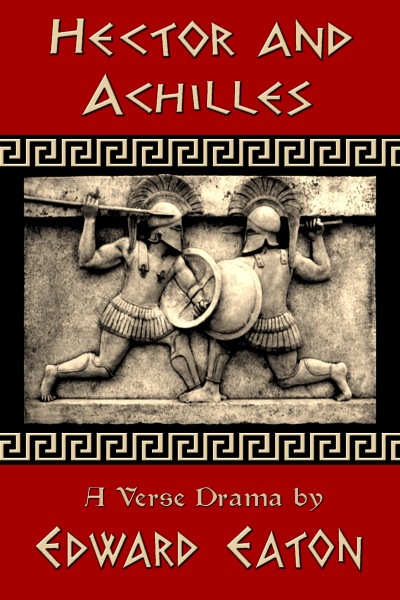 See inside the book at Amazon, Barnes & Noble, Lulu, and Smashwords

“I recently saw a production of this play (HECTOR AND ACHILLES) done by the MIT Shakespeare Ensemble and directed by the playwright, Edward Eaton. It was a great performance. There was drama infused with light humor, presenting different aspects of human nature — love and devotion to the community, to the family; sacrifice; duty; glory and immortality and death. Sometimes, I was sitting on the edge of my seat, gripped by the action and the humor. Several times, I let myself lean back, close my eyes, and get lost in the poetry and the language. Even though I saw a production, I am sure it will translate well as a reading experience.” ~ reviewed by Mariela Mihaleva [FIVE STARS]

“I saw the play HECTOR AND ACHILLES and was taken from the very beginning a how the dialogue seemed to flow like well-written poetry. A friend who had read the play script mentioned that it was all written in tradition English haiku. I took a look at the book and sure enough, its structure is written in 5-7-5 syllables. As a lover of both poetry and plays this was a double treat for me to take in on a Friday night. The telling of the occidental centuries old epic myth in haiku I think brilliant and a testament to the author’s willingness to experiment with different structural styles in the formation of compelling dialogue in the art of dramaturgy. It is an experiment that comes across with great success. The intense emotions conveyed by the characters of the play are not hindered in any way, and words flow smooth like water making the text appealing to the reader. This is one book any aspiring playwright looking to perfect their storytelling and composition of dialogue might want to consider reading. It is also just simply a great story told in a very unique way pleasing to all familiar with Greek mythology or lovers poetry.” ~ Amazon Customer Review [FIVE STARS]

“Edward Eaton gives readers a new take on an old story in HECTOR AND ACHILLES, a verse drama of the great battle of heroes in the Trojan war. The dramatic dialogue is written in a series of the standard 5-7-5 haiku, lending power and beauty to the language of the play. Written in two acts and divided by Hector’s death, the play is framed by Hector’s monologues at the beginning and Achilles’s monologues at the end. As with any rewriting of a classic story, this one reflects the feelings of the writer’s times, and there is a great deal of musing about life, death, the nature of the gods, and the reasons behind war. The Trojans are cast as the good guys, and the Greeks as hairy, war-mongering buffoons, until Achilles’s speech casts even that certainty into doubt. The poetic language emphasizes the pathos of scenes between Hector and his father, wife, and son. The Greek heroes Odysseus and Ajax become the source of comic relief. For those who know the story, there are lines that these characters utter foreshadowing events they know nothing about, but at which the audience can smile and nod knowingly. Eaton’s Hector and Achilles leaves the reader, and I am sure the theater audience, with much to think about regarding war, grief, and courage. Additionally, the verse style of the dialogue makes the play much more enjoyable to read than the average script. The beauty of the language and the power of the story overcome the lack of visible action, though I suspect a theatrical production of the work would be well worth seeing. I recommend HECTOR AND ACHILLES. It is a rewarding read.” ~ reviewed by Gail Wickman for Readers’ Favorite [FIVE STARS]

This site uses Akismet to reduce spam. Learn how your comment data is processed.

This site participates in an affiliate rewards program with referrals to Smashwords.com.